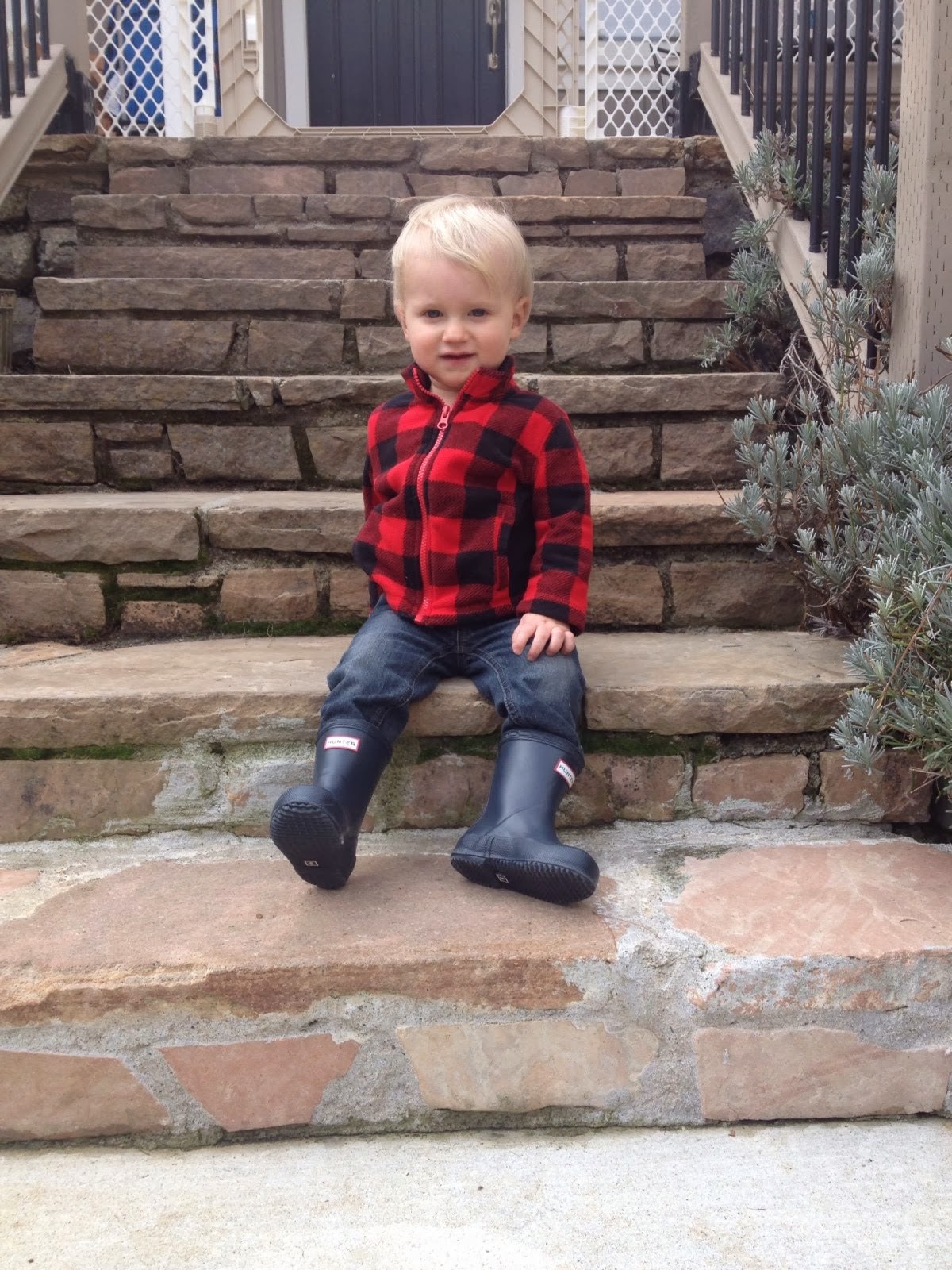 The last time I slogged, LAHP was 36 weeks pregnant with Jack, who was the size of a cantaloupe. Judging by the looks of him now, it's literally been a lifetime since I posted to The Slog.

Jack: handsome, outdoorsy, and the future bringer of world peace

Recently, Lauren and I have made BIG, exciting changes to our lives. Lauren accepted a position at Google last fall and is finally working in the stimulating and challenging environment she's craved. Even I contributed to her application process when she mentioned our years of virtual training via gchat!

On my end, I joined Australian coach Darren Smith's international squad of triathletes. Darren is a world class coach who has a knack for developing nobodies into somebodies in the sport. In the last Olympic cycle, six of his athletes made the Olympic team from his or her respective countries, and his top girls finished 2nd and 4th.

Given that, it's no wonder that "Train with Darren Smith's triathlon squad (they spend December in Kenya)" has been on my life list which I put together a few years ago. I'm finally doing it! And it's cool that being part of this group helps tick off a few other items, such as: interact with people from diverse backgrounds on a regular basis AND plan more in advance to give myself a cushion and be considerate of others. The timeliness piece is actually part of how we do business, so it's been a compulsory transformation.

I've been at camp in Chula Vista, CA since the start of the year with nine of my squad mates who hail from AUS, NZL, France, Italy, Great Britain plus two fellow Americans. We have a Dutch physio/massage therapist, Rick, a Swiss sports science intern, Nico, and Darren's wife, Liz Broad, our dietician extraordinaire. My personal support staff, Kevin, is along with me at camp too, doing his training and making me coffees and egg bombers on demand. Or something like that.

To glean some insights into the Dsquad and our coach, check out this Competitor Radio interview that Darren and a few of us went on together. 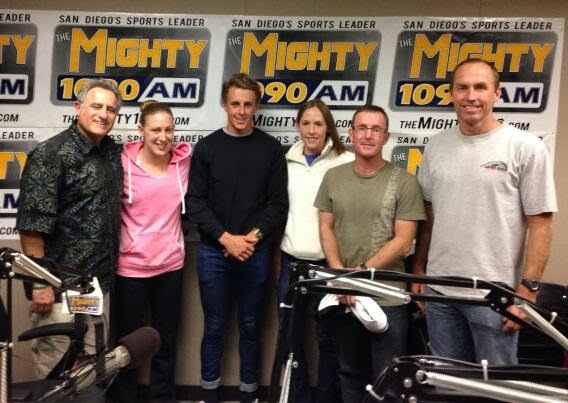 I have a few weeks left in sunny SoCal getting fit before I start a worldwide trek with my coach and training partners. First up, we head to New Zealand for training camp with two races thrown in. Early April we fly to Cape Town, South Africa for another camp and race. Our journey continues onto Pretoria, South Africa (near Johannesburg), and then possibly rounding out the first half of the year with a race in Yokohama, outside Tokyo, Japan. It'll be my first time visiting all the countries mentioned so woohoo to the new adventures ahead! While I'll be back in the states for a month or so, I'll head to Europe for the summer races. I am also joining the French Grand Prix triathlon team, Poissy, and will be competing for them at some point later in the season. Definitely lots to write home about.

LAHP and I typically close out a slog with some kind of dog photo, but instead, we have photographic evidence that mountain lions DO roam wild in LAHP's part of the state. 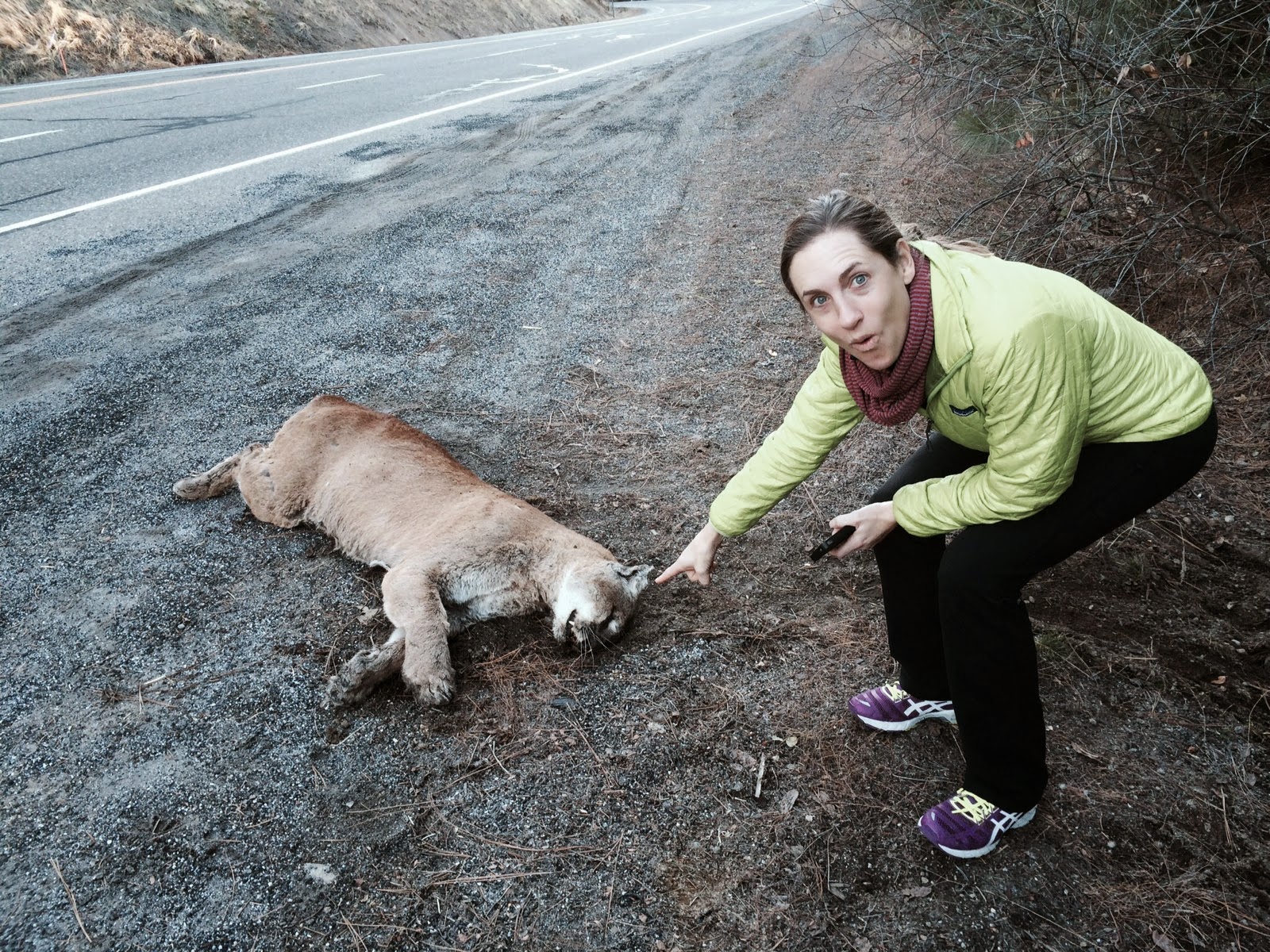 
Lauren here. Much has happened since I last blogged about the qualities of the croc sandal in my highly pregnant state. Jackson “Jack” Lovell Pataky arrived on October 22nd and since that time we've changed a multitude of diapers and spent countless hours at night not sleeping. I gladly embrace no sleep and dirty diapers to hang out with this little dude, though. Watching him change and grow every day has been awesome and scary, as he is pretty much a blank slate and I feel if I do not spend 100 hours per day with him doing developmental activities he might grow up and not read or fail to develop gross motor skills or some other unspeakable thing. 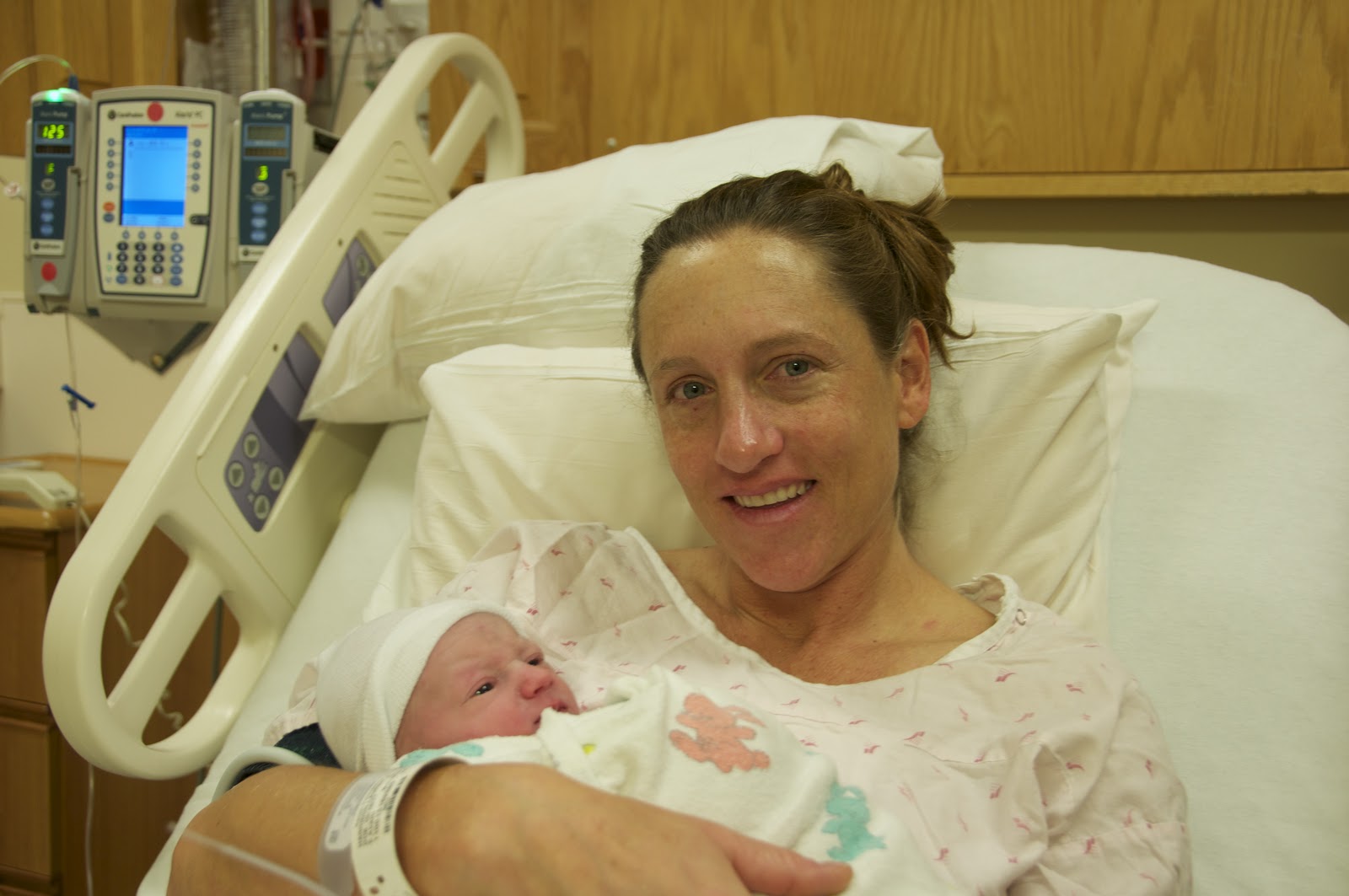 The first few months he pretty much did nothing but lie around and sleep. At 4 months, however, he has hit his Pataky stride and is constantly moving, kicking, babbling, etc... This guy definitely has some energy! He just turned 6 months old and is now busy spitting out rice cereal, pulling Ronin and Shamwa’s tails and making screeching sounds. Clearly he is his father’s son.

Along with a new child comes new “furniture.” We have amassed countless large pieces of primary colored plastic marketed to entertain and help children develop. These heirloom pieces have almost surpassed the current bike count in our garage. I’m always amazed that the possessions of a sub 3 foot child can take up so much room in our house!

Anyway, this is a triathlon blog so I might as well discuss some triathlon.

I had this unrealistic dream goal that I'd pop out Jack and be back to full on training within a month. Nope. Didn't happen. FIRST, I wish I had listened to what people told me about the aftermath of pregnancy. I assumed I was impervious to any negative effects of pregnancy, as if I was more special than all the other billion mothers out there. My body felt like it had fallen off a cliff. I was not able swim, bike, or run for 5 weeks but did get the clearance to walk…. And WALK I DID. On Jack's 7th day of life he did a 7 mile walk in the ironbomber stroller. Matt complained that by 4 weeks post pregnancy I had worn down the tread on the stroller wheels. I'm also happy to report that I beat out all the other stroller pushers in my hood. Similar to my biking mentality (which I'm not proud of), I do not like being passed while walking. Jack and I are walking WINNERS, I tell you.

Walking quickly moved into "jogging" which moved into running which then devolved into no more running as my ligaments decided that they were not ready to hold up their end of the bargain. After countless chiro/art/massage appointments I THINK I'm finally able to put in some real run training. You can't miss me running down the block now. I'm the girl with 100 yards of rocktape mummifying my body!

While in my early stages of pregnancy, I spent some time on my mountain bike, so naturally I felt like I was ready to tear it up mountain biking post pregnancy. I’ve learned, however, that I am faster ascending a hill than descending, as one day I was passed by a girl wearing a hello kitty helmet descending some 180ish degree turns. No joke. I thought that incident might embarrass me to descend faster.

I threw my hat in the XTERRA ring in mid April and raced the XTERRA West Champs. Might as well go all out with my first pro race back, right? I quickly learned that I do not excel in hurling my body over cliffs and flying down the backs of boulders, rock gardens, and deep sand traps. I spent more time in that race on the ground in various contorted positions then I did actually riding my bike. By the time I got to the run I decided to call this disaster a training day and just limped it in to bank some racing fitness. I quickly thereafter high-tailed it back to the road and hope to be racing soon. I did hone my T3 skills at this race, as immediately afterwards Jack was thrust into my outstretched arms to be nursed. No rest for the weary!

All kidding aside, I have days where I find myself thinking I’ll never be competitive again. There are times when I’ve been up for the 10th day in a row at 4am and wondering if I’ll ever get sleep. I also have glimpses of my former self, however, so we'll just see how my body responds to training. I cannot expect to miraculously get back to my former shape without putting in the hours suffering. When I do get down about such things, all I need to do is look 3 feet left of my bike trainer where Jack is busy doing tummy time and looking up at me. He is my relatively silent motivation: "Mom - if you are not going to go give it your all, then why are you doing wasting your time messing around on that trainer. Come play with me!" This, and the fact that I pay 25 cents/minute to a sitter/nanny when I’m training outside is motivation to not squander any training opportunity

Regardless of how I perform, I want to be able to demonstrate to Jack the importance of being healthy, doing hard work, and setting goals and how this is preferable to sitting on one’s ass playing "sports" via video games. Jack has already had a few swim lessons and is well on his way to swimming in the fast lane at Stanford masters.

Anyway, Team Pataky is truly blessed to have Jack as our new addition and can’t imagine life without him. See you at the races! 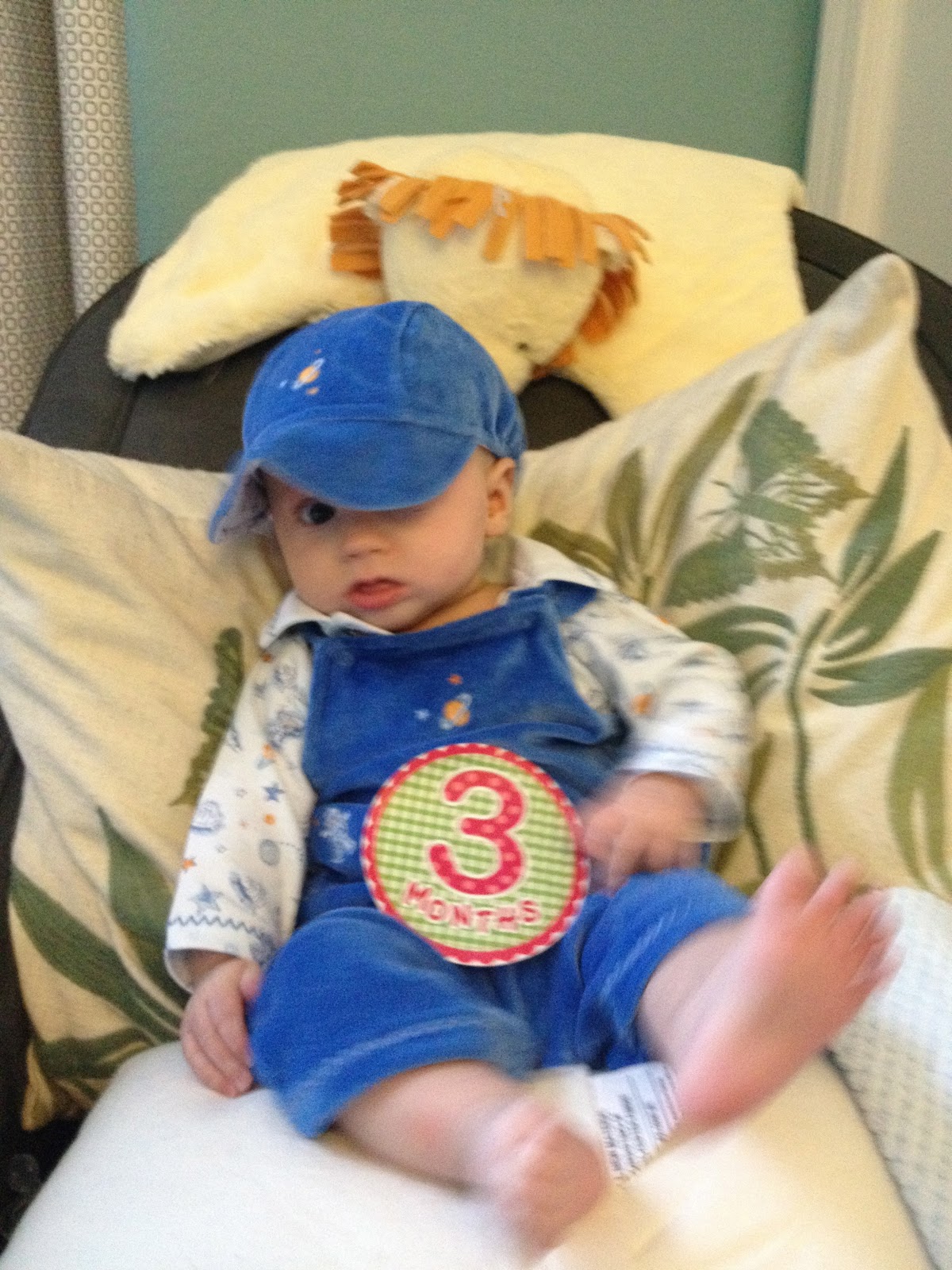